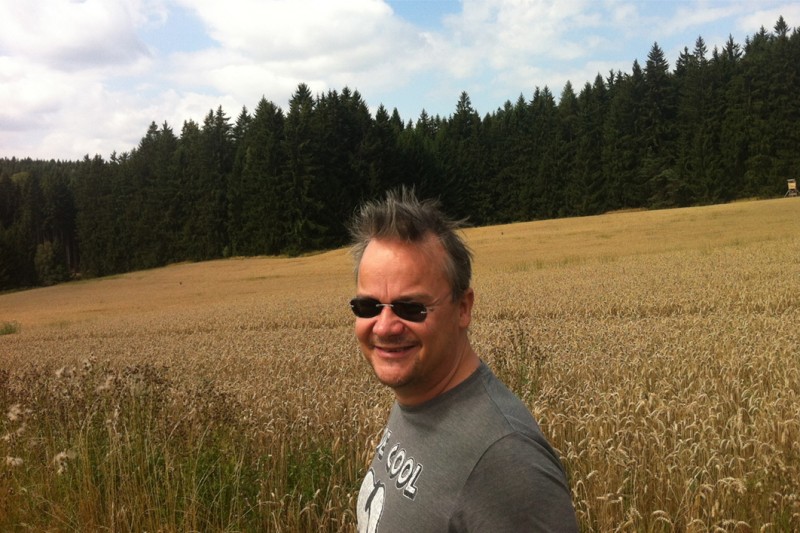 David Saudek is a representative of the strong Czech post-modern generation who can hardly be overlooked. His generation arrived on the artistic scene during the 1990s. It was as early as during his studies at the Academy of Fine Arts in Prague (between 1991 and 1997) – where he passed through the Studio of Sculpture, headed by Professor Stanislav Kolíbal, and the Studio of New Media of Professor Michael Bielický (while he was active as an assistant in the latter) – when he profiled himself as an artist capable of developing his expression in a rather wide spectrum of artistic means. His creative beginnings were linked with gestic painting. Saudek then subsequently shifted his main focus to the sphere of new media (video art, video installation) and film, in which he received several significant recognitions. However, gradually, his oeuvre has been dominated by painting. The result of his conceptual explorations are paintings characteristic of concentrated form which at the same time retain multi-layered meanings. The artist layers and fixes symbols and associations and creates synoptic pictures. He excels in capturing the essence of contemporary visuality, being inspired by the enormous accessibility and richness of the mass-media culture, especially on the internet which is the modern form of information storage, and in news media.
He employs layers of records, symbols and subconscious memories, departing from the idea that every sign bears evidence of its cultural ambiance and period but simultaneously works as an independent, impersonal structure. He also dives into the cultural history of mankind, and connects its “sediments” (prehistory – figural murals from the caves in Altamira, Lascaux; antiquity – Egyptian hieroglyphs; Judaism, Islam) with modern symbols, logos, marks, signs, brands and slogans, sometimes transforming them and giving them new meanings. He establishes very specific correlations and contaminates the past with the present.
A painting must be seen otherwise than merely via the “accepting”, passive look. Saudek challenges viewers to synthesize the various “plans” present on the canvas through their own brainwork. Parallels to this can be spotted in modern music which specifically employs harmony and dissonance or, for example, in the new drama which had long exceeded the classical principle of the unity of time- and storyline.
In one line of his oeuvre, he takes the classical route of Pop Art and uses the form of aesthetically impressive “collage”, transposing symbols to maximum shortcut and achieving exceptional intensity of expression through almost “typographic” simplicity. He pinpoints his canvases by drawing and colour, and works with the balanced role of colour surface and draughtsmanship details. In the second line of his oeuvre, he unfolds his rich imagination in the expressive realm between reality and its magical appearance.
The author's paintings can be divided into different cycles – e. g. series “Vanished Records”, “Heroes”, “Gloria Slavia”, “Hraniční syndrome / Borderline Syndrome”, “Resilience”, “Riders on the Storm”, “Holy Ways”, “Praga aeterna” and others. The cycle “Hraniční syndrom / Borderline Syndrome” is linked to the eponymous collective exhibition project on the subject of the so-called displacement of the German population from the Czech lands after the Second World War as well as Czech-German co-existence throughout the borderline areas of Sudeten. The project was exhibited in major state galleries in Czech Republic as well as in Germany, in Dresden and Munich.
In the series “Riders on the Storm” and “Holy Ways” (2015-2016) David Saudek creates precise, more or less realistic scenes that remind the viewer of something experienced. The paintings evoke a kind of “déjà vu”, while the impression of familiarity is accompanied by a sense of something enigmatic, mysterious and unusual. The author always chooses the “hero” of certain situations, trying to capture his inner state. He depicts motorcyclists, cyclists, fast cars as “beautiful objects”, but also a girl like an angel hovering in the golden brightness of the metropolis. The paintings are stunning visions of mystery and power of nature that are simultaneously compelling metaphors for the journey of life.